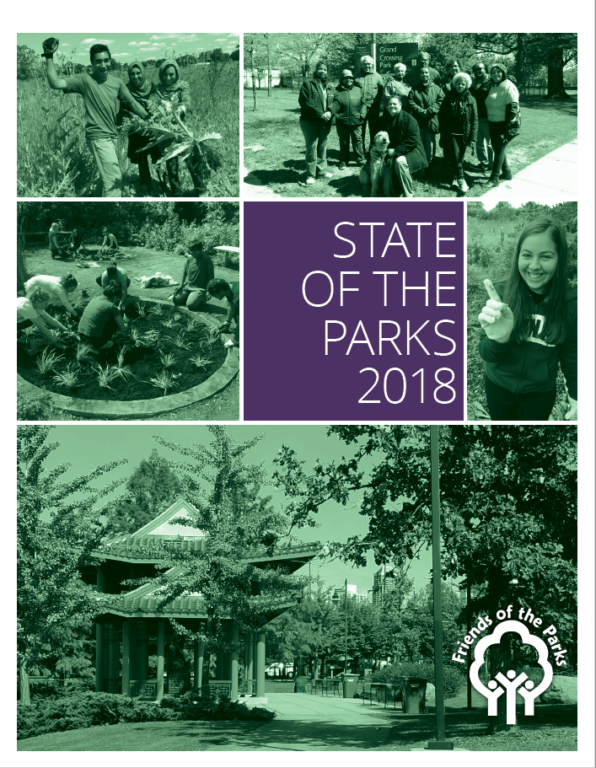 A NOTE FROM OUR LEADERSHIP

Friends of the Parks’ 2018 State of the Parks Report is grounded in the historic pursuit of democracy and equity in and for Chicago’s parks. It responds to concerns that Chicagoans have brought to us over the last three years as we have done our day-to-day business of supporting park advisory councils, park stewards, and other park partners. Additionally, we conducted a “Listening Tour” and stakeholder surveys to inform our existing programs and our board-led strategic planning process, which culminated in 2018. Among many concerns, we repeatedly heard from stakeholders on the south and west sides that it is time for a new legal initiative against the Chicago Park District because of racial inequities. These concerns were undergirded by a Summer 2014 investigative report in The Chicago Reporter: “Inequity in park access lingers.”1

Thirty-five years ago, after years of investigation by both citizen groups and the federal government, a Consent Decree was established as a result of a 1982 United States Department of Justice legal initiative against the Chicago Park District for discrimination against minority communities. The court order created a rigorous framework for a responsive, transparent, and equitable park district. It was in effect for six years, and Friends of the Parks registered our displeasure when the court lifted the order even though the Chicago Park District was not in full compliance with the terms of the Consent Decree.

Twenty years ago, recognizing how much progress was still left ahead, Friends of the Parks collaborated with dozens of stakeholders on a State of the Parks report. This in-depth investigation on many park-related topics, from community participation to programming, graded the district based on both publicly accessible information and the experiences of hundreds of park users from across the city. We are glad to add this project to this great tradition and to honor the contributions of past activists.

In many ways we are proud to recognize the impressive achievements and incredible mission of the Chicago Park District. To maintain over 8800 acres of parkland across nearly 600 parks while facilitating over 26,000 activities is an extraordinary work. The park district continues to add new acres and programs annually, helping Chicagoans to engage with natural spaces, recreational opportunities, and each other.

Yet our research has revealed challenges to democracy, transparency, and equity in the system, and it suggests some rather obvious disconnects between the Chicago Park District’s investments and the needs of underserved communities. Parkland, amenities, and programs continue to be unequally distributed across the city. The approval rate of capital requests suggests significant class and race inequities. Chicagoans lack much of the power for meaningful democratic participation that is available to residents of many other cities across Illinois and the country. Throughout this report we have endeavored to provide a fair perspective on the district’s work while laying bare some hard and difficult truths.

In June 2018, we previewed at our “Parks as Democracy?” Conference the key themes that were emerging from our research and solicited feedback from participants. That led us to spend much of the summer on further investigation, including submitting numerous Freedom of Information Act (FOIA) requests to the Chicago Park District to garner further insights. While we were at work, Chicago struggled through another difficult season of violence. The data we received through those FOIA requests speak quite clearly to part of the problem: the Chicago Park District is providing quality park programming the least in the marginalized communities whose youth need it the most.

As Friends of the Parks implements its revised mission statement, adopted in 2018 — to inspire, equip, and mobilize a diverse Chicago to ensure an equitable park system for a healthy Chicago — this report will serve as a basis for educating and organizing neighbors across the city who want to pursue the health and success of both their local parks and the district as a whole. It may answer questions they currently hold and serve as a catalyst for their own curiosity and activism. They may find, as we have, that there are some problems that are clearly related to racial inequities. Meanwhile, there also exist systemic issues that cut across the entire park district and affect parks and Chicagoans city-wide regardless of demographics. As we keep digging deeper into these issues and seek to elevate a city-wide conversation about a new path forward, in the months ahead we will convene a broad cross-section of stakeholders to more fully flesh out and add to the high-level recommendations we have included herein.

Also, with a municipal election season upon us, we will partner with “parktivists” and other activists alike to ensure that these themes and concerns immediately are inserted into the public dialogue. Our new mayor and new city council should be expected to be informed about and to respond with their visions for healthy parks for a healthy Chicago.

We look forward to working with all who care for the city’s parks toward a well-balanced park system, protected by Chicagoans for Chicagoans, advancing the individual, community, public, ecological, and economic health and well-being of our city.

Special thanks for this report go to the primary investigator and author, Friends of the Parks Policy and Program Associate Daniel La Spata. We also want to recognize previous Program and Policy Associate Julia Epplin-Zapf, who contributed significantly to the Listening Tours, stakeholder surveys, and early versions of this report. Finally, we recognize the leadership of former Board Policy Committee Chair Rev. Sylvia Y. Jones, whose leadership of the committee and as a long-time park advisory council leader have brought important perspectives to bear. Many other staff, volunteers, members and friends have also contributed to this report. We are grateful.
Sincerely,