The Last Four Miles Plan would add almost 500 acres of new parks and beaches, which provide recreational and health benefits for urban dwellers. The plan would complete a single lakefront-long park to knit the city together and extend the lakefront trail for walkers, runners, and cyclists—to Evanston on the north and to the Indiana border on the south.
​
Chicago is one of the world’s most beautiful cities, unequaled among large industrial cities, due to the vision of our founding citizens and park advocates. Credit for preserving our lakefront heritage first belongs to the trustees of the Illinois and Michigan Canal who, when selling city lots in 1836, crafted a caveat that protected a portion of Chicago’s lakefront to be “forever…open, clear and free.”

The culmination of this preservationist tradition was crafted by Daniel J. Burnham and Edward Bennett in their classic Plan of Chicago, 1909. The Chicago Plan established a unique vision for the city that sets us apart from most cities in this country, and indeed, all across the globe. Our 26 miles of public lakeshore park system creates a beautiful park expanse that is unrivaled around the world for its beauty and public accessibility.

In the years that followed 1909, several city administrations and generations of citizens took up Burnham’s bold plan. Taxpayers approved referendum after referendum to pay the costs of creating the landfill for parks stretching north to Hollywood and south to 71st Street. Through the 1950’s the City implemented much of the lakefront plan, to the point where today, 26 of Chicago’s 30 miles of lakeshore boast public parks and amenities for the recreational enjoyment of all.

Yet for the last nearly sixty years, there has been a conspicuous absence of definitive action to complete Burnham’s lakefront plan. While nearly everyone agrees that Burnham’s open shoreline project has helped to make Chicago one of the world’s great cities, and most concur that the great plan should be completed, no concrete steps have been taken by the City in over 50 years to complete the system and achieve the 30 mile goal.

In addition, the first policy of the Lake Michigan and Chicago Lakefront Protection Ordinance specifically calls for the City of Chicago to “Complete the publicly owned and locally controlled park system along the entire Chicago Lakefront…” (Adopted December, 1973)

The Last Four Miles: A Legacy to Complete, hosted by Bill Kurtis

Partnerships
When Friends of the Parks held a charrette in preparation for making the Last Four Miles Plan (2006) we engaged many groups, councils, and individuals. This is a partial list of the people who contributed to our efforts:
SOME RESOURCES: 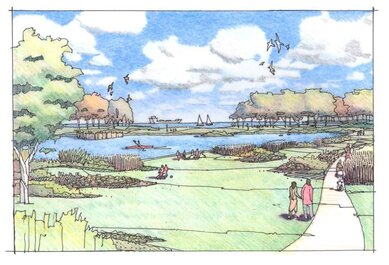 LEARN MORE FROM RESEARCH STUDIES:
Economic benefits
Completing the Last Four Miles would increase property values adjacent to the new parkland and beach areas, as well as promote economic revitalization with new small businesses in the vicinity of the new lakefront parks.  New construction jobs would be generated.
Ecological benefits
Besides providing additional recreational amenities, the Last Four Miles of new parks and beaches also contribute to Chicago’s long term environmental sustainability.  The new parks and beaches would provide shoreline protection from storms and erosion.  The new parkland would create aquatic and wildlife habitat and support birds on the migratory bird flyway.   Five hundred acres of new ecologically sustainable parks and beaches would improve the air and water quality of Chicago and benefit Lake Michigan’s ecosystem.
Support Us